Only in Israel’s vibrant democracy election can happen twice a year! This April election outcome created an unprecedented equilibrium of political parties that did not allow for the leading party to form a majority coalition of 61 Knesset seats. Hence – Election, The Sequel!

While we in South Jersey are somewhat distant from the all-Israeli campaigning craze, this is a fantastic opportunity to take a sneak peek into what matters to the contemporary Israelis through the lens of the Israeli electoral system and political platforms.

Arkady takes a trip to the Israeli Embassy in New York while discussing the upcoming elections.

The election results are in!
See how South Jersey compared to Israel.

Thank you to everyone who participated in the Israeli Election simulation.

The Israeli Election results are in! Here is the comparison between 90% of the Israeli and 100% of the South Jersey votes. Forget the parties, focus on the 4 blocks that will really shape the next step – formation of a majority government. The right block has clearly won the majority of the votes, but the right cannot rule.

Lieberman's “Israel Our Home” party (Yisrael Beytenu) is the real winner being the pivot balance. He demands from Likud and Blue & White to form a "national unity" broad and liberal government, as well as extensive secularist legislation. To tangle the deadlock even further, Lieberman has added that under no circumstances, will he sit in a coalition with the United Arab List party, that de-legitimizes the State of Israel as a Jewish state.

Prime-minister Benjamin Netanyahu has just announced that the coalition negotiation will be held on behalf of the newly created “national block” that includes Likud and all other right wing parties. This means that no right wing parties will be sacrificed while negotiating with other partners. It was also done to minimize the risk of "defecting" of the orthodox parties in favor of Blue & White coalition.

Enjoy the math and behold further development. It is far from over.

Roughly speaking, there are three realms about which the Israeli voters care: national security, economy, and Jewish identity of the State.

On national security, the disagreements range between halting or increasing the Jewish settlement of Judea and Samaria; two-state or one-state solution; and softer or harder IDF’s hand. On economy, it is a good old brawl between more or less taxation, regulation, and public services. As to the Jewish identity of the State, views vary between complete separation of religion, and all the way to the Halachic State (Jewish religious law). Some parties can be simultaneously left and right on various issues, and voters enjoy a menu of parties as diverse and colorful as any Israeli shuk.

BOTTOM LEFT CORNER:
Seats (out of 120) in the Knesset from April Election. Question mark (?) indicates an estimated number of seats 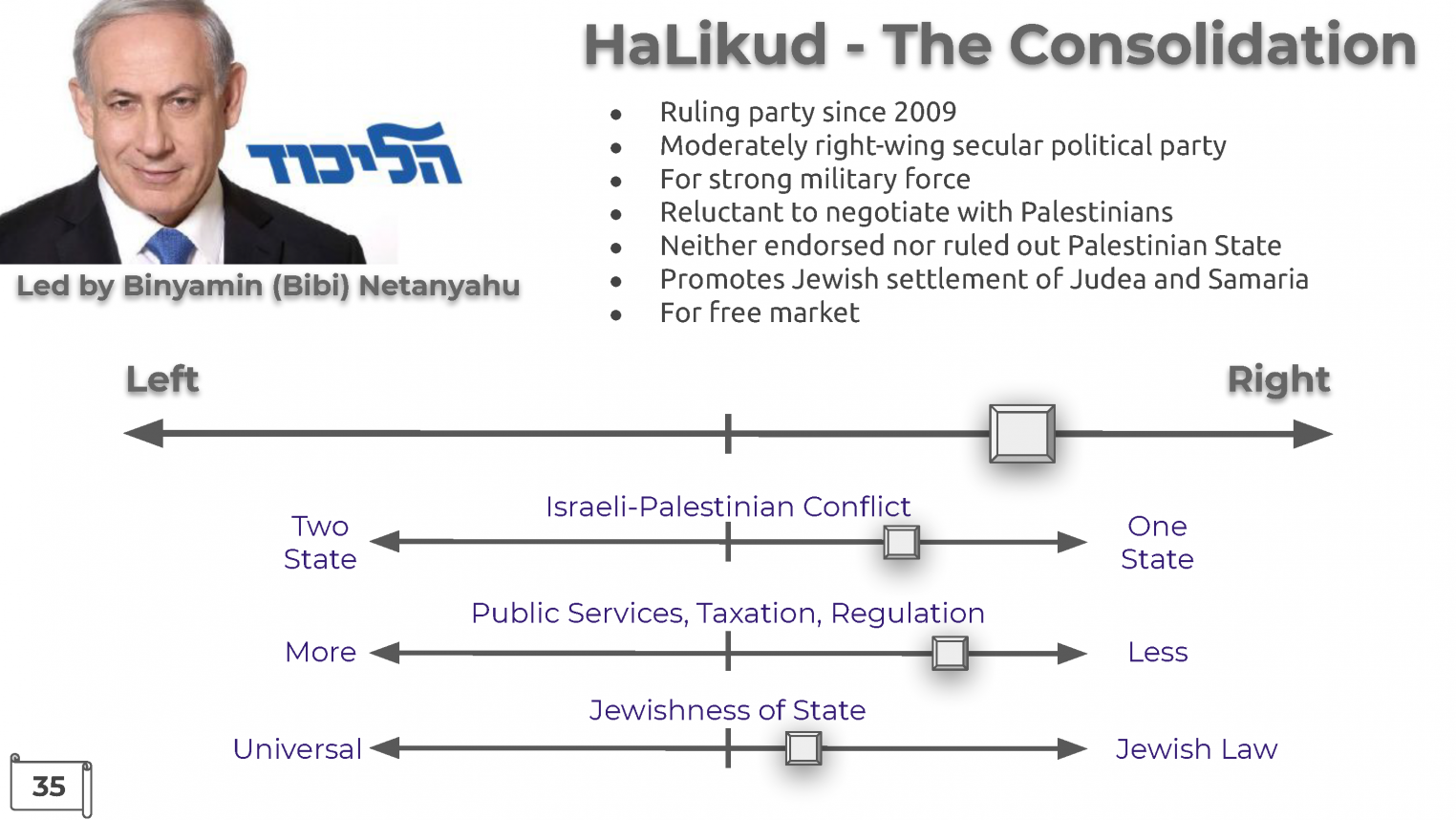 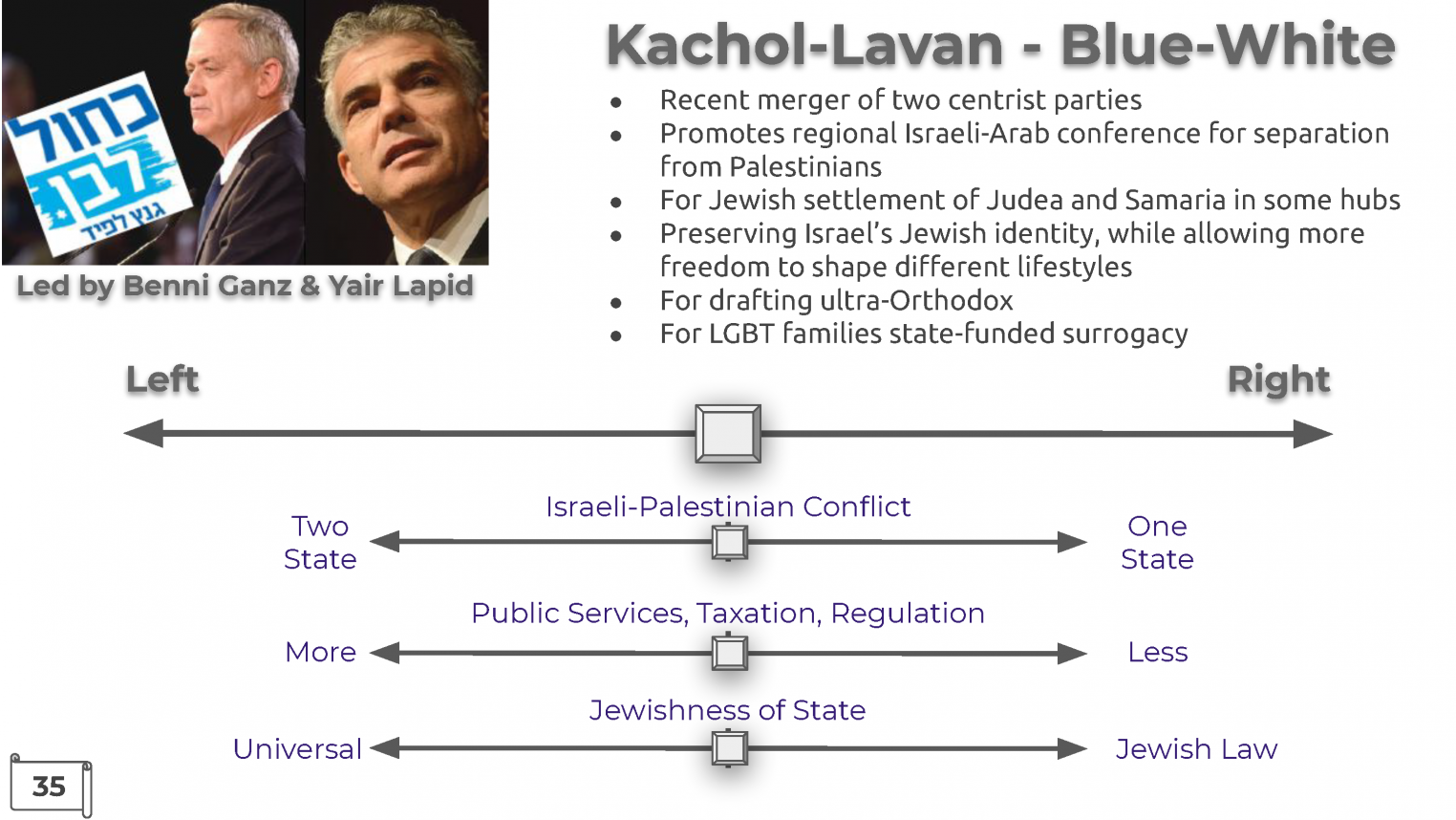 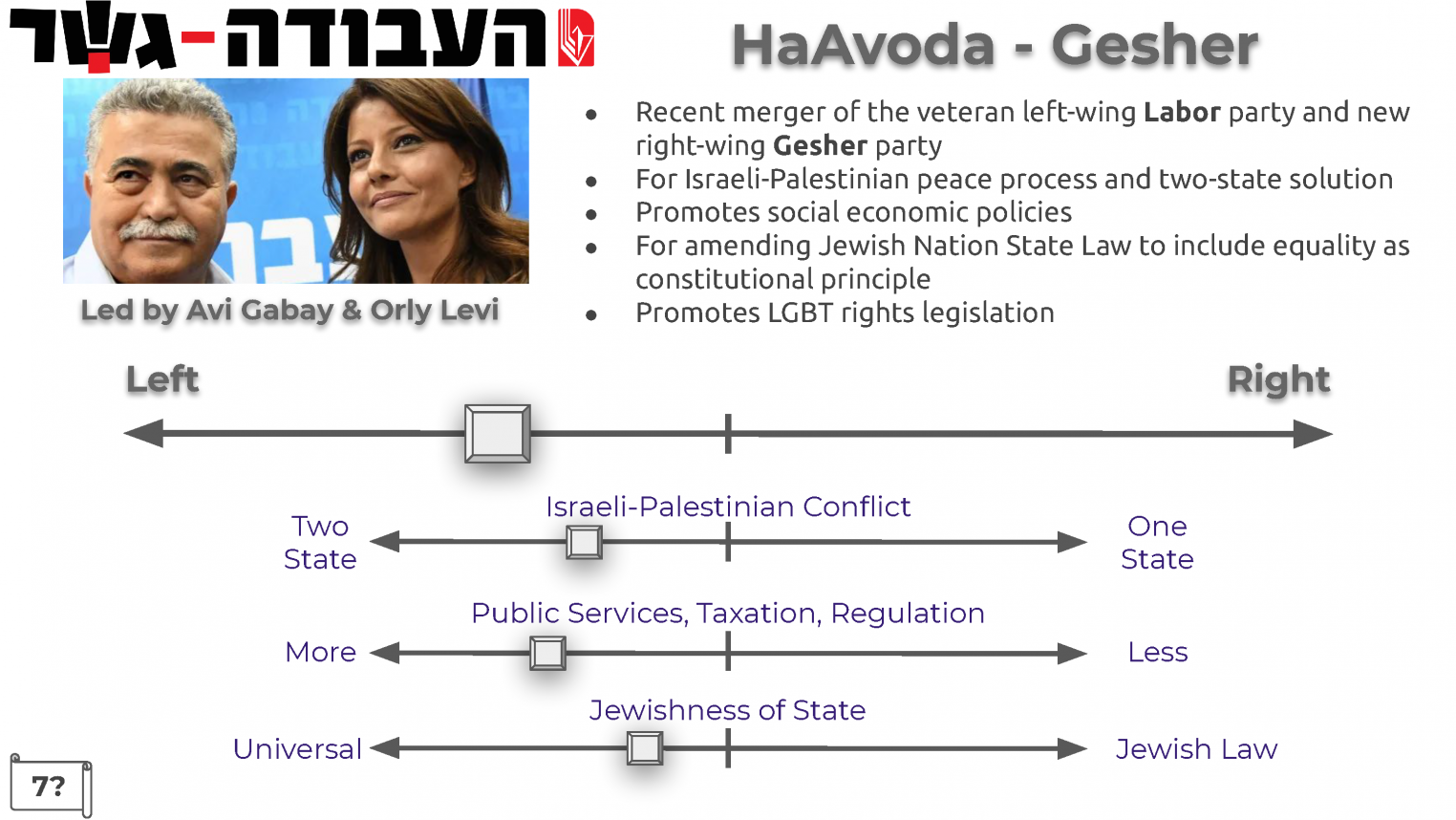 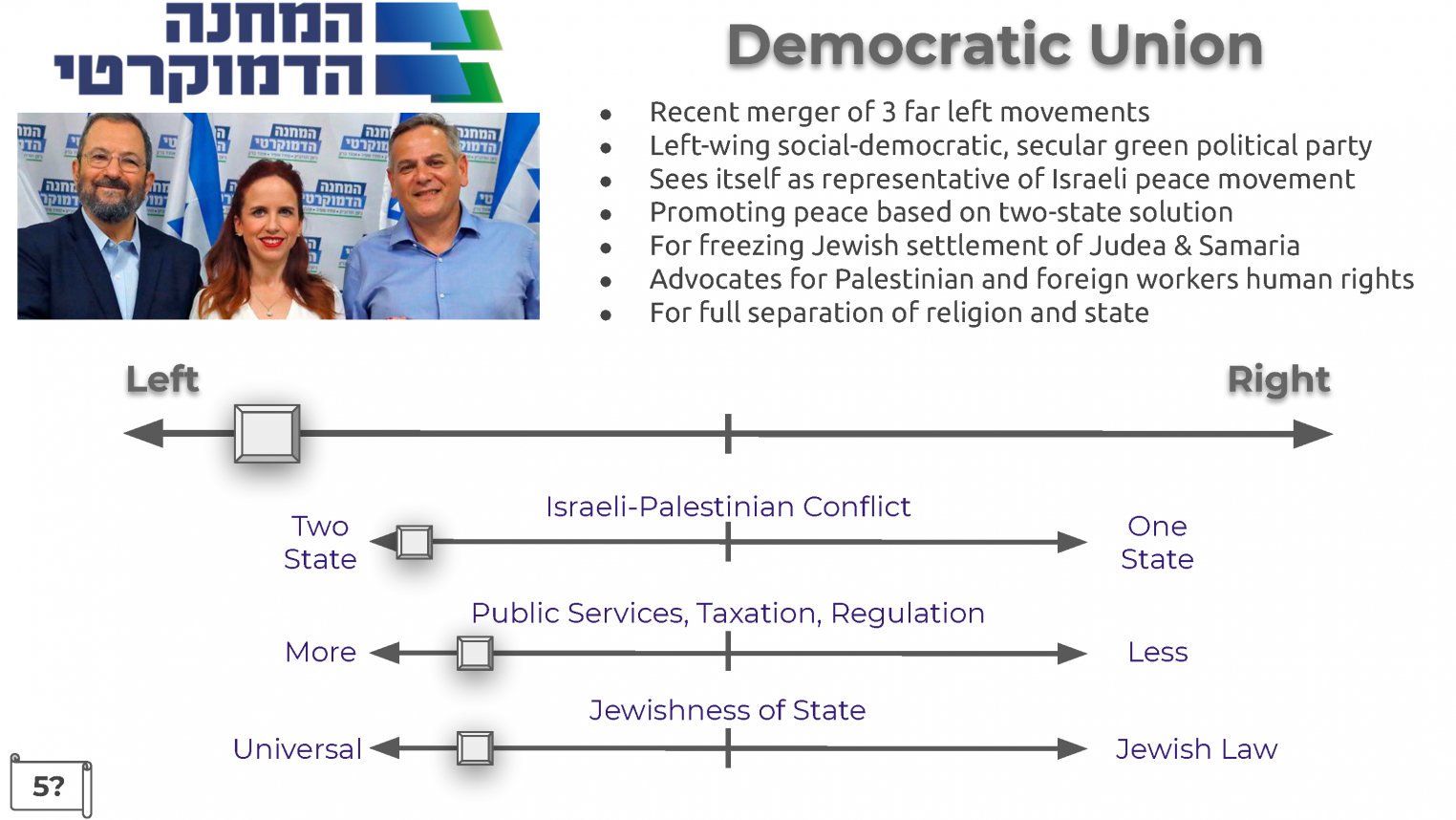 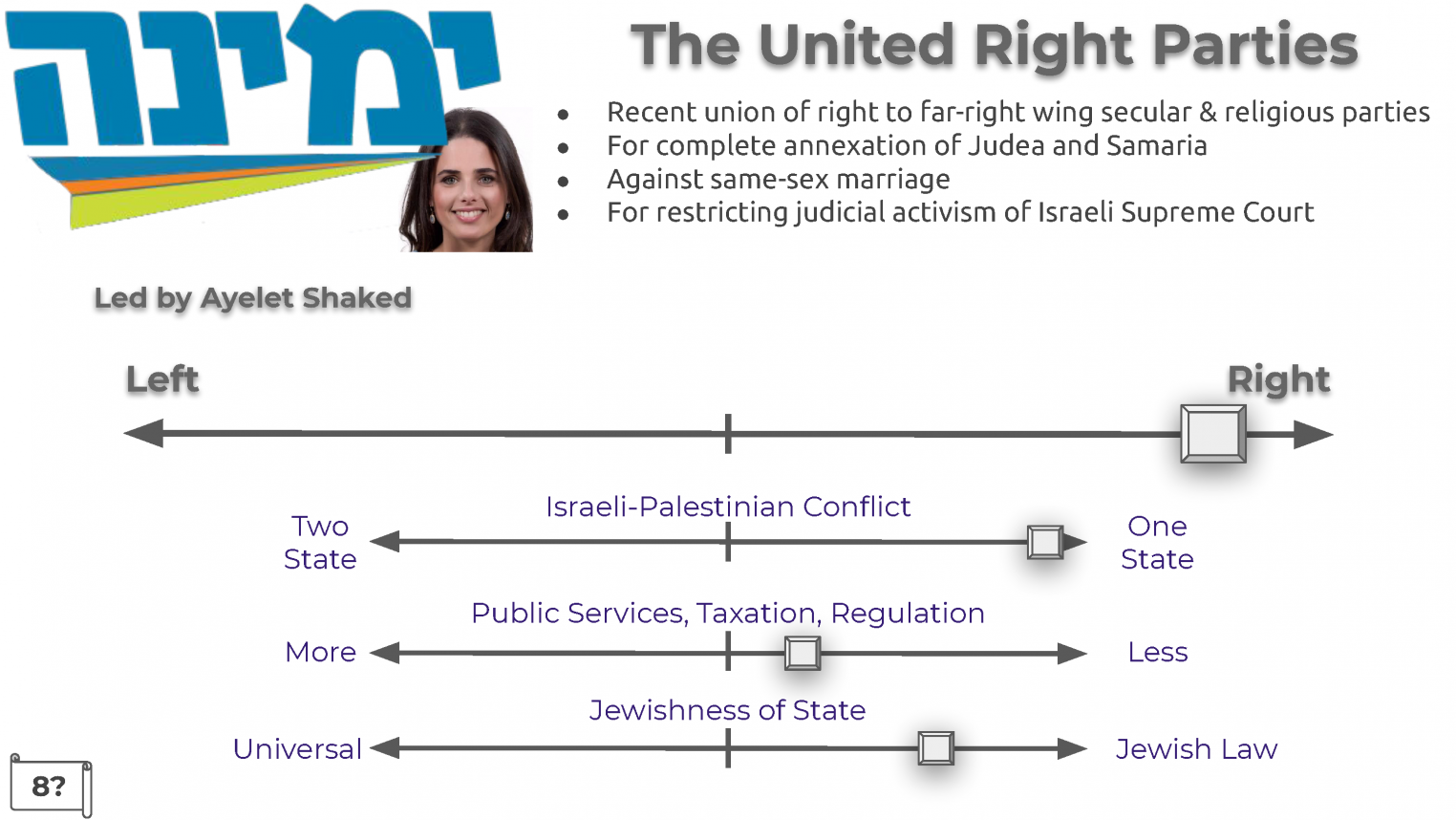 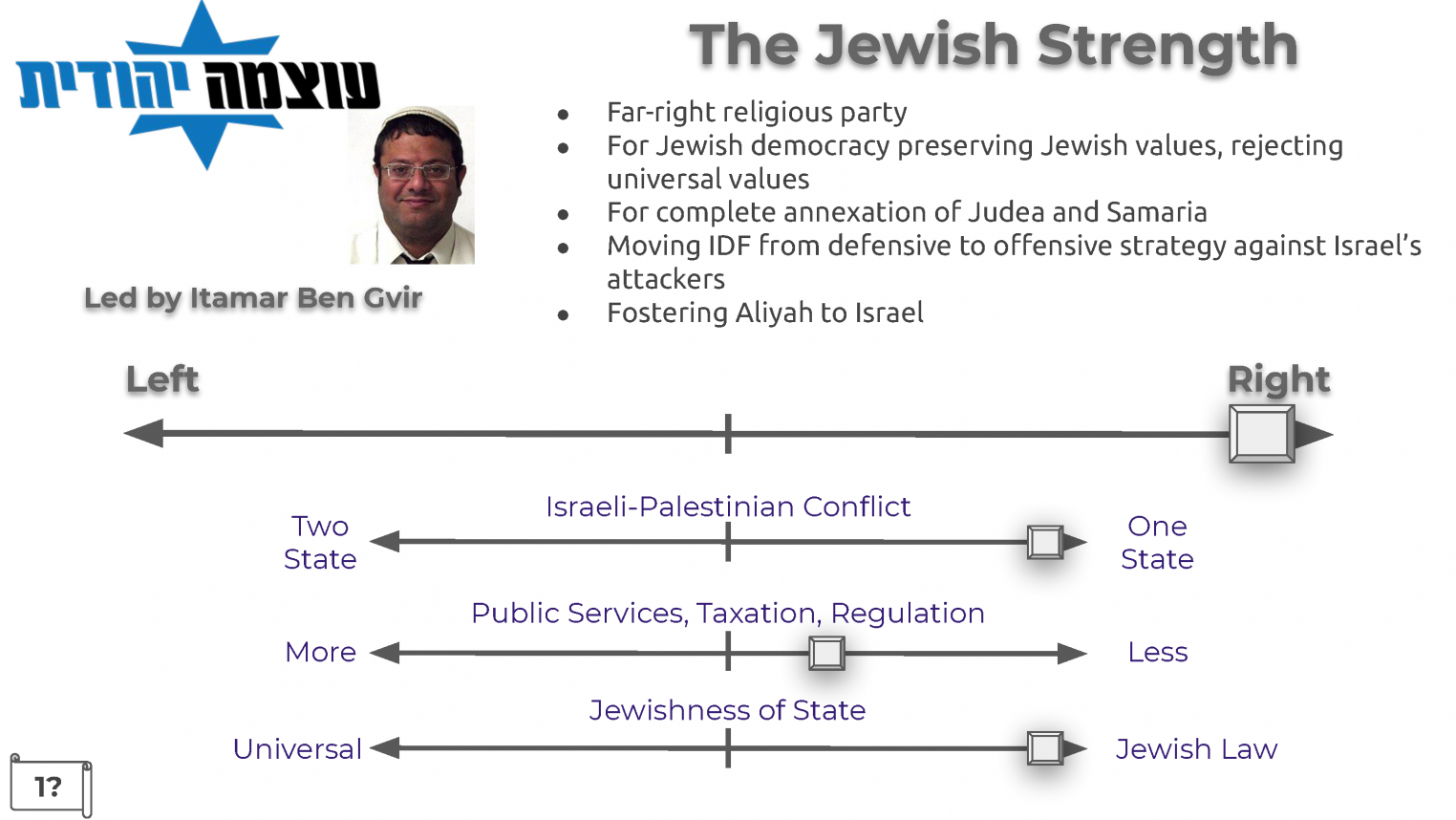 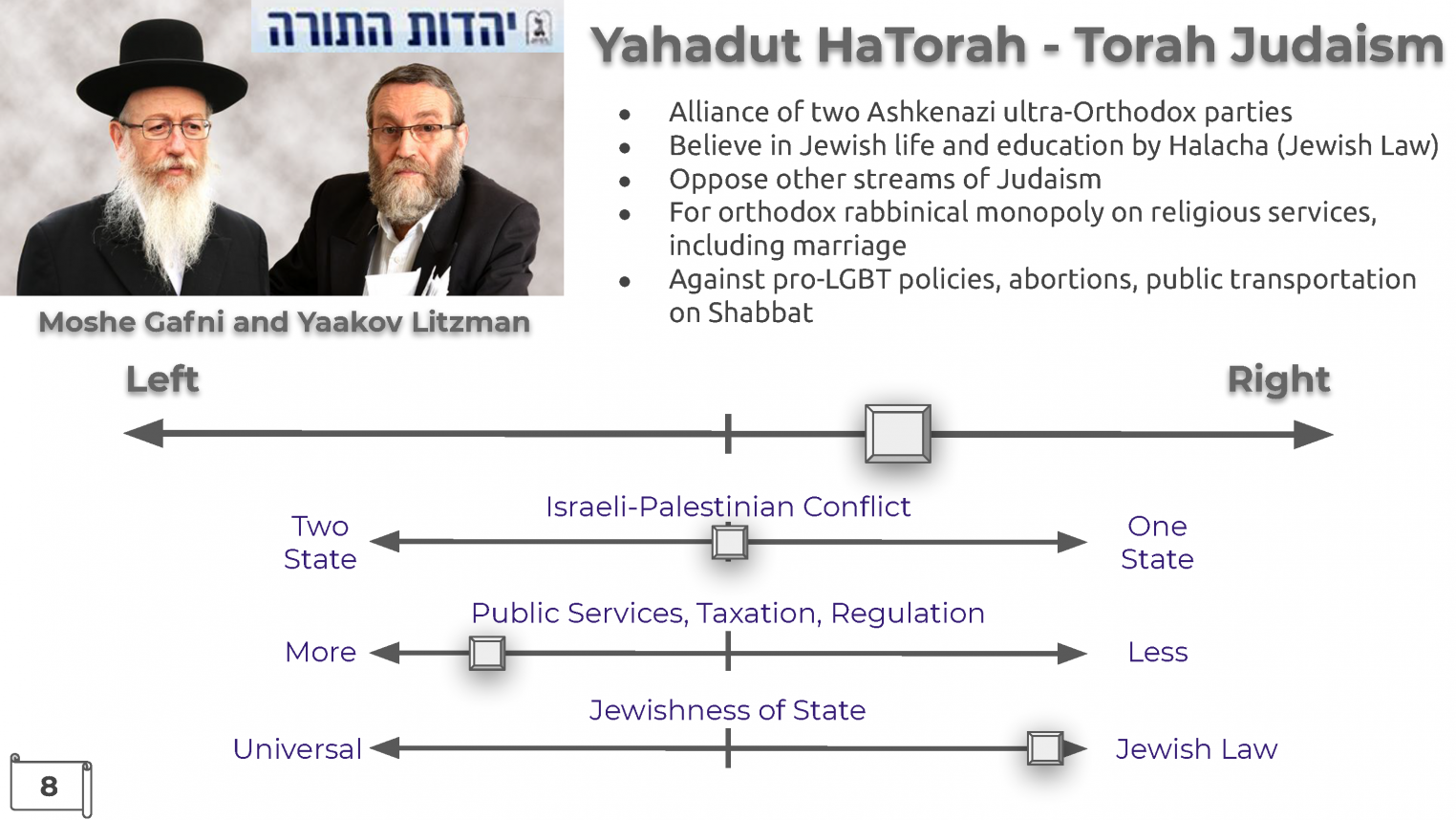 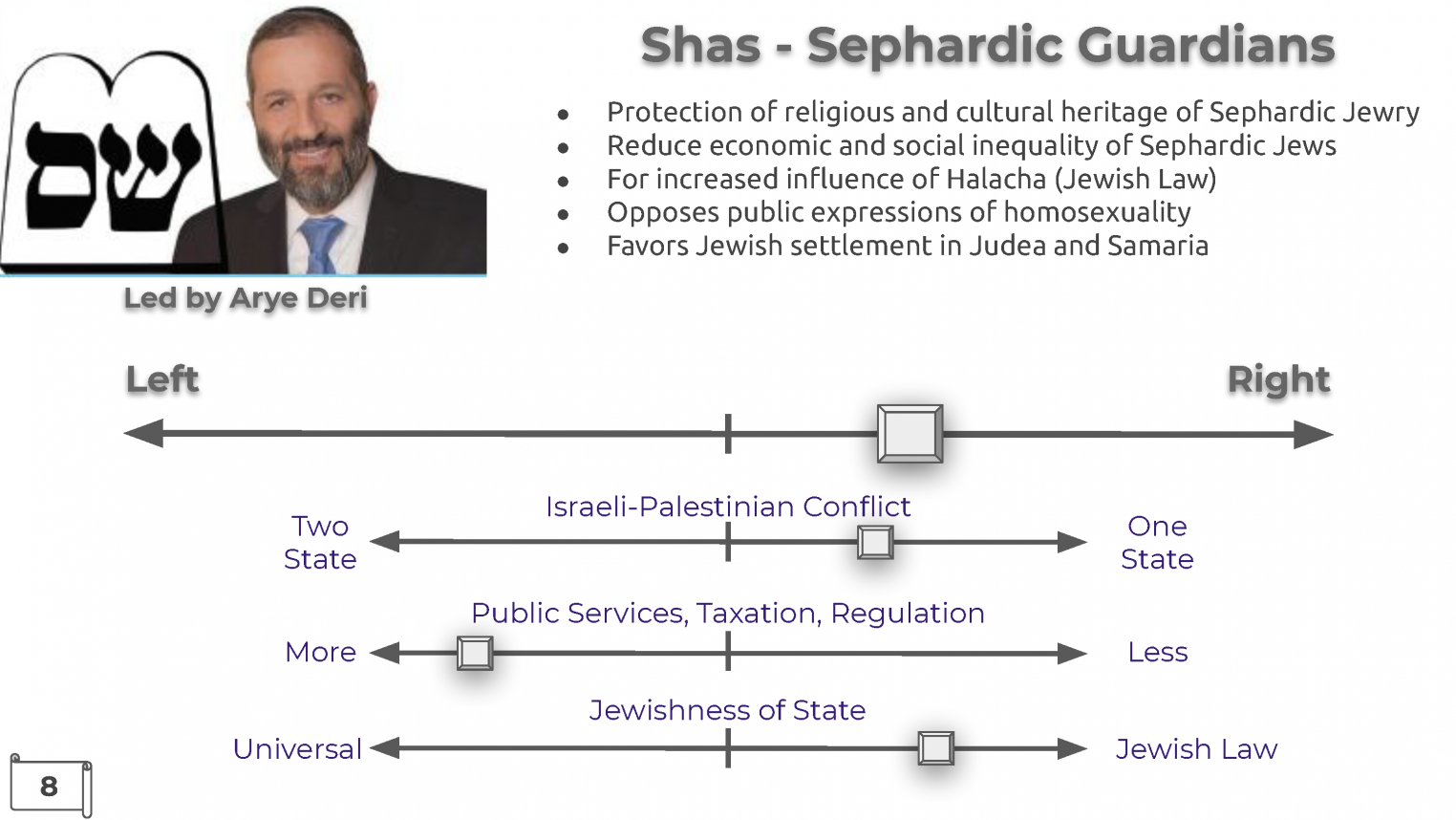 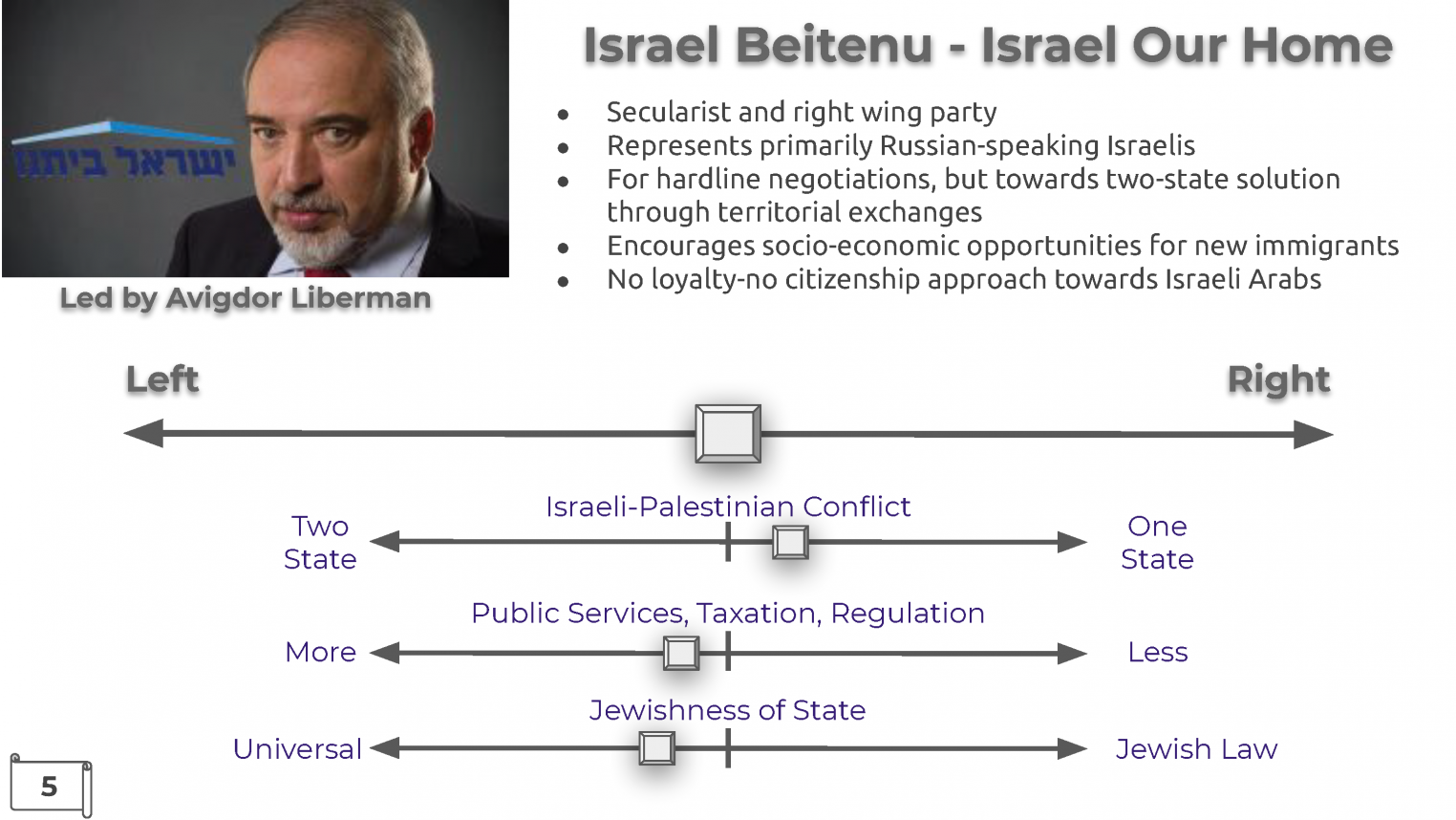 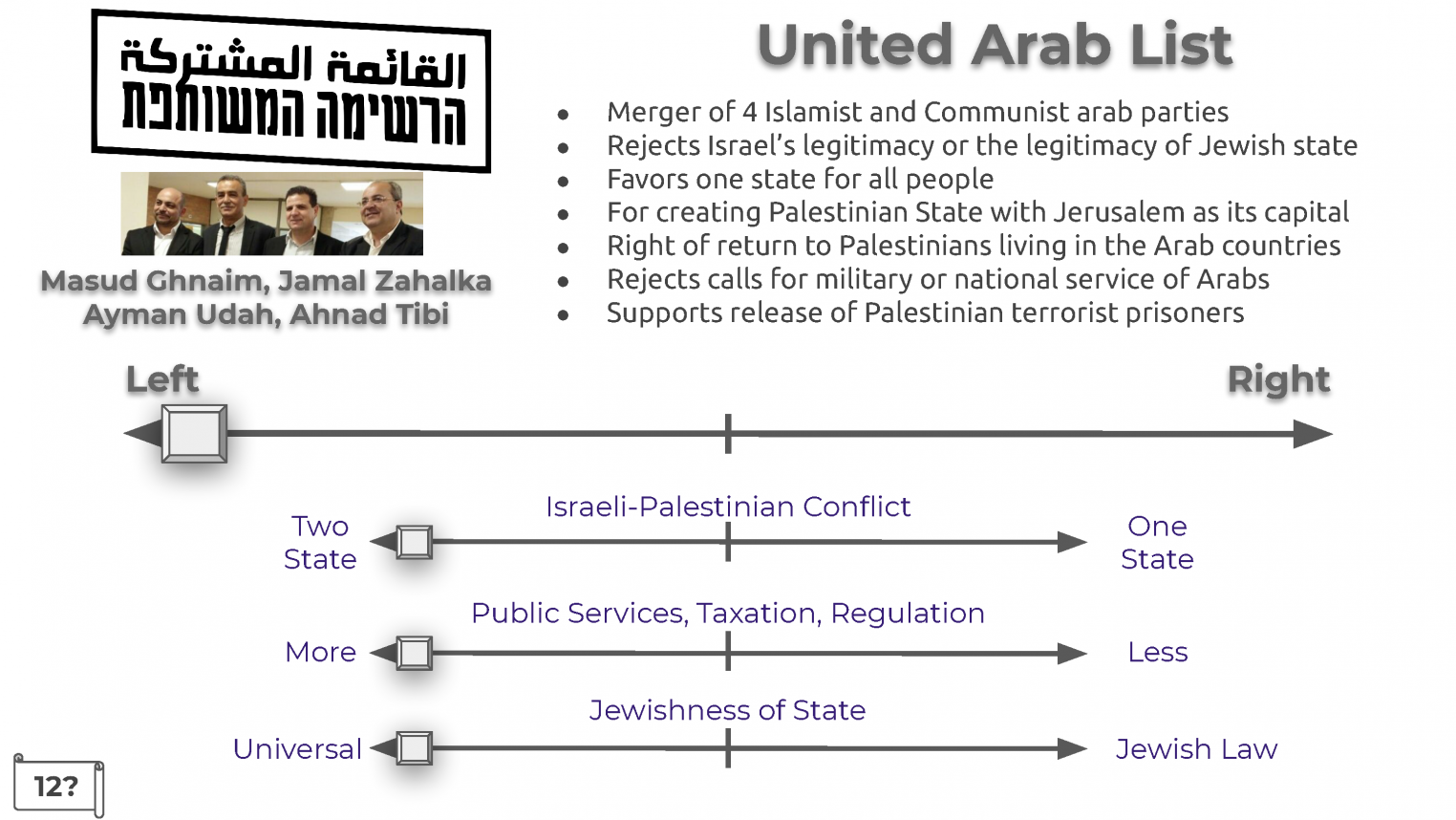 A Broad Comparison Between the Parties

Projected number of seats (out of 120) in the Knesset are indicated.